Is an American multidisciplinary artist, famous for her paintings and enormous murals that can be seen all around the world. Her pieces have composite, and yet harmonized structure and form, emphasized through the use of exuberant and lush colors, and shades. This painter absorbs immediate encirclement, processes it in her imagination by adding psychedelic experience and a mix of the popular culture referents, and then represents it to the viewers in her artworks. Maya’s paints contain a certain sexual and spiritual note, expressed by bright geometric compositions, and made of a waste spectrum of materials like ink, acrylic, spray color, tape, and wheat paste. Hayuk’s artworks are amazingly large, but also attractive and gentle at the same time.

Leaving no surface, discipline, or location untouched, Maya Hayuk makes use of an unbounded and unpredictable matrix of sources, mediums, and styles. Her relationship to the images she invents is an intricate and complex free association and a perspicacious act of unfailingly putting all the parts together to make the whole. She employs intense yet pertinent colors, complex geometries, and fine lines in order to collect the constituents that make up her present and visceral world.

A veritable workaholic who at once possesses the expertise of an entrepreneur and the spontaneity of the works she makes, it is immediately obvious that she is much, much more: muralist, photographer, printmaker, designer, curator, player of records, writer, performer, collector, Barnstormer, painter, illustrator, videographer, documentarian, and on.

Her obsession with symmetry and her collection of images of mandalas, playing cards, hexes, totem poles, Ukrainian Easter eggs, quilts and bandanas play out in works that espouse the traditional as well as the innovative. A cat’s cradle of six magic hands seemingly spinning, a burst of strings in the sky like liquid streamers, and giant two faced birds with faceless people made of elaborate patterns, dappled wood grain and loads of hair exist in ambiguous landscapes scattered with oil wells, flags, flowers, feathers, and fingers. Longhaired couples matter-of-factly stick their limbs into each other’s bellies and turn into tree branches that twist into mountains of wood, walls, and paper made with paint, ink, and gusto. Maya Hayuk’s wild and unabated imagery may appear chaotic but she has mastered an exact and resolute practice.

Photographing musicians has fueled Hayuk’s livelihood for the last few years and she has enthusiastically designed and illustrated posters and record covers for Prefuse 73, Savath and Savalas, Jackie-O Motherfucker, Oakley Hall, Om, and Devendra Banhart. Also, under the moniker Open Arms, Hayuk has been making hilarious and poignant holiday tribute music videos with Home-guitarist Andrew Deutsch, including one for the garage rock band Awesome Color. Her penchant for music, coupled with the process of collaboration, is akin to musicians jamming. About these “killer jams” she says, “Collaborating with other artists is what I'd imagine playing in a band would be like.

Hayuk continues to produce work that is social, dynamic and out there for anyone and everyone to take in and discover. She continuously gives herself over to places, people and projects in a true communal bohemian fashion, working collaboratively as well as in a reproducible way, in her murals and prints respectively.

The immediacy of printmaking as well as mural making has long endured history as a collaborative, politically charged and often underground activity. Works in multiples are accessible, distributable, and relatable in their abundance. Murals reach the masses and speak to an audience often inaccessible and disregarded. Hayuk’s degree in Interrelated Media and Philosophy gives her foundations in leftist principles and her work embraces the vernacular of the people. She is part political activist, part social enthusiast and she astutely relies on the printing press for her more sublimely political pieces.

The collaborative projects and interactions that Hayuk has become increasingly known for have an impact in a productive way that a lot of contemporary or fashionable work completely lacks. Her instinctive large-scale paintings directly effect public spaces and are genuine interventions that enrich their environment. They are completed with the help of friends such as the Barnstormers collective and Hayuk remains expectant and accepting of the give and take associated with such joint efforts.

There is something very classic rock punk folk rainbow peace freak out about Maya Hayuk that is very hard to put a finger on, but really it’s all about love. As if kindled by her distinguishing heart-shaped insignia signature, Hayuk’s disposition and practice eschew unpleasantries and welcome the irony and satire of real life. 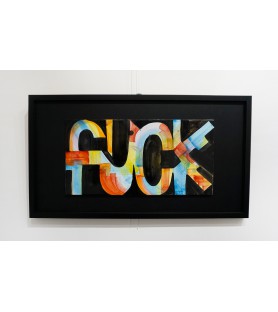 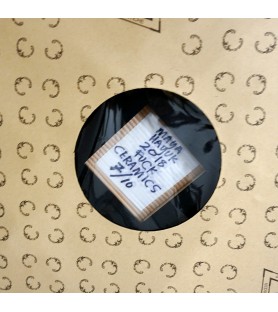 signed and numbered on the back

this is the number 7