Lush / lushsux is a graffiti artist from Melbourne, has been referred to as the ‘Aussie Banksy’ and yeah lots of other big australian artists get referred to as ‘the aussie Banksy’ but have any of them been the only Aussie to contribute to Banksy’s Dismaland? Nope. Humourous, sardonic, sarcastic, ironic, crass, sad, motivational and very much meme-tastically dank meme-loving.

Lush is a moniker of an Australian graffiti artist, whose point of view draws only two reactions – hysterical laughter or sincere disgust, giving him a reputation of Australia’s number one anti-hero. With his sarcastic worldview reflected in his art, this Melbourne native’s crass yet strangely appealing and amusing graffiti is revitalizing the scene in a big way.

Lush prefers the shocking as the subject matter – nudity, either cartoon or real life, cussing, bodily excretions are all main themes that run through his body of work. His attitude recalls the original sentiments of the earliest graffiti writers, with only difference that what once was shocking is now mainstream. Graffiti is becoming an accepted art form and simply writing on a wall doesn’t shock anyone anymore. Regarding all that, Lush decided to push the limits of the accepted and injects into his graffiti so much perversity that the old shock value is restored.

Amusing his own self with his work as much as it amuses everyone else, Lush somehow manages to take nothing seriously while sending some intensely poignant messages. Whether this was his intention when he first picked up a spray can or whether he was just another jaded artist who happened to not care in the least bit, Lush became an influential force on the streets.

Lush’s cavalier attitude extends to his views of his contemporaries as well. When not creating fancied up versions of bathroom stall graffiti, Lush hurls his wit straight at other artists and at the street art scene itself. His scathing and sarcastic portrayal of artists like Banksy, his preferred target for the moment, Shepard Fairey and Revok questions the message, purpose and place of street art. In his most recent exhibition in Los Angeles, he concentrated heavily on modification of Banksy’s most recognizable pieces. Lush has also had solo exhibitions in Australia and San Francisco. He also produces drawings and videos, in the same mocking and ironic sense as he creates his wall pieces.

Lush’s debut show at Backwoods gallery in 2010 was met with a mixed response, where the audience was psychologically traumatized and sprayed with a mix of blood and broken glass. Controversy has fueled reputation for the artist who has since gained global recognition for his brutal commentary of street and graffiti art.

Lush continues to live and shock unaware citizens in his hometown, Melbourne. 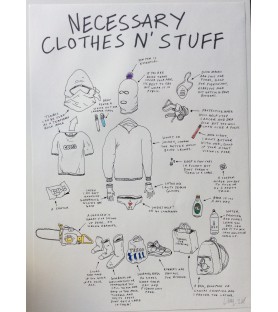 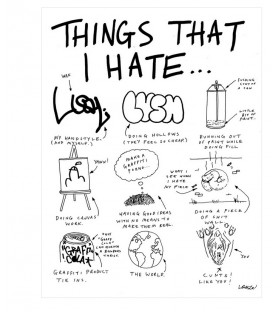 Original Drawing on Paper from Lush's