Liqen was born in 1980, in Vigo, a port and industrial city of Galicia, in Spain. From a very young age and together with his brother he begins to stand out in an innate way in the drawing, in the handling of the proportions, which will be polished thanks to the fixation and observation of the reality that moves around him.

A strange gift for proportions and his early passion for nature, for the future of man, the diversity of species (particularly insects) makes it an amazing capacity for cosmogonic creation, for inventiveness, in its inner formation fantastic and delusional that the world and matter give it.

All this takes him to the point of adopting Liqen, the name of a pseudovegetal, like his metanname, starting an extraterrestrial adventure through his own disturbance, under which he signs his pieces and deciphers his symbiotic and multipolar character (scientifically the mixture of two reciprocal species, the algae and the fungus), as a novelty in evolution that separates from its ancestors and is able to adapt to adverse weather conditions. The reading of the book “The Threat” by Pierre Gascar, which fascinated him in part by his nomadic tendency, was a key to this, a book that gathers the impressions of a French realist (the same writer) on a journey through certain regions of the world , where it makes curious relations between the traditions of some peoples with the lichens.

“The lichen possesses a certain fetal character. They reactivate the creations of the unconscious, the dark thought, the ghosts, and sliding easily out of their reality often force us to prove their existence.”

In his blood it was written that his path would be art and he finds on paper, and later on the walls of the streets, the best means to express himself and share his mysterious illusionism, dimensioning his work, sharing, regenerating space with energy. 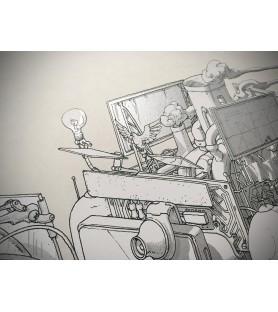 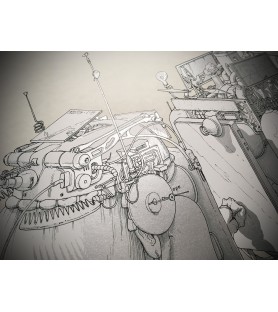 The edition is printed in 4 colour silkscreen in an edition size of only 50,

Signed and numbered by the artist.